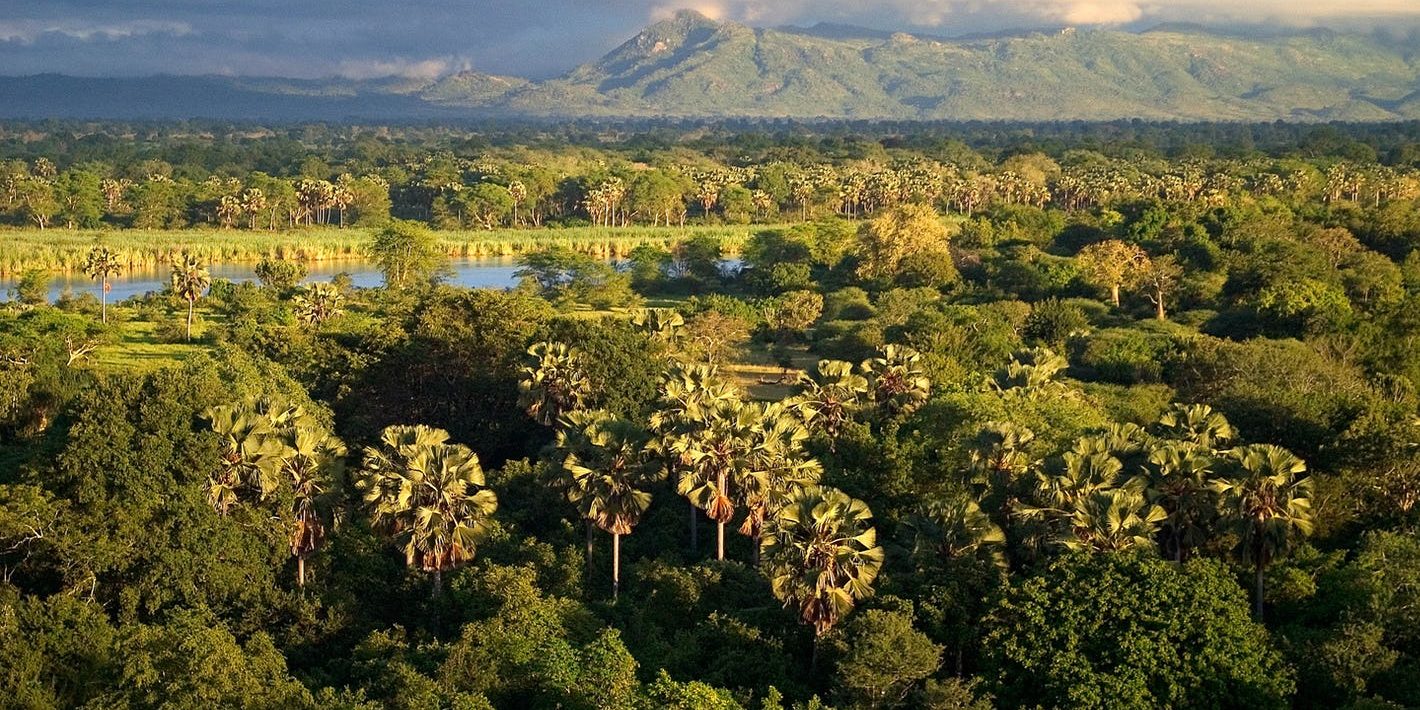 Depart from Dar es Salaam early in the morning to Selous Game Reserve.

At 55,000 km sq, Selous is the largest protected game reserve.  It is named after legendary British hunter-explorer Frederick Courtney Selous, who was killed here during the WW1.

Start the day with an early morning walk and end the day with a full game drive. Picnic lunch will be provided and return to the camp just in time for dinner. Overnight at Mbega Campsite, full board.

Boat safaris on the Rufiji River bring you as close to the aquatic animals as possible. Evening game drive and overnight at Mbega Campsite, full board.

MIKUMI NATIONAL PARK is flanked between the Uluguru and Udzungwa Mountains. Mikumi National Park is home to buffalos, giraffes, elephants, lions, zebras and leopards. The park is also famous for its wild dogs and 6m long pythons. Over night at Mikumi Guest House, full board

Morning game drive in Mikuni and thereafter we proceed on to Udzungwa National Park. Overnight at campsite, full board

Morning walk to the waterfalls or hike to Luhombereo, Udzungwa highest peak. Over night at Udzungwa National Park campsite, full board

UDZUNGWA NATIONAL PARK is the newest, opened to the public 1992, and one of the most beautiful wilderness areas in Tanzania. Covering an area of 1900 sq km., the uniqueness of this park lies in its biodiversity in hosting a variety of animals and plant species not found anywhere else in the world. The red colubus and the Sanje crested manabrey, elephants, buffalos, leopards, and sable antelopes are some of the residents in this park. A good range of birdlife is present which includes Rufous winged sunbird, Iringa akalat, Lagden’s bush shrike and Udzungwa partridge. Activities include a hike to the Sanje water falls or a climb to the top of the Luhombereo, Udzungwa highest peak. Over night at the Udzungwa National campsite, full board

Accompanied by an armed ranger, we start the day with a walking safari. Afternoon game drive, overnight at Ruaha National Parks’ huts, full board

Morning and afternoon game drives. Overnight at the Ruaha National Park Huts, full RUAHA NATIONAL PARK, Tanzania’s 2nd biggest park and host to a number of animals which rare or absent in the North. The rare animals include the African Wild dog, roan and sable antelope and the greater kudu. The Great Ruaha River, which provides life to the park, flows through the eastern side of the park and is home to hippos, crocodiles and a variety of water birds. Overnight at the Ruaha National Park’s Hut, full board.

Depart after breakfast for Mzuzu, the third largest town in Malawi. Before reaching Mzuzu we will  go through the boarder  formalities which will take less than one hour. The drive will take approximately 8 hours through one of the most beautiful escarpments and sceneries in southern Africa.  Overnight at hotel bed and breakfast

In the North of Malawi, the high montane grasslands of the Nyika Plateau rise above the bushveld and wetlands of the Vwaza Marsh. Covering more than 4000 km sq. these protected areas have the finest scenery, wildlife and wilderness to be found in the country. Together they offer the ultimate safari. A park of outstanding natural beauty, the Nyika is home to a bewildering variety of unusual birds and game, including roan antelope and leopard. From September to April, a myriad of wild flowers and orchids burst forth. Nyika Plateau is specialising in walking safaris, optional activities include horse riding, mountain biking and trout fishing.  Nyika National Park is the largest in Malawi and a Malaria free area. Horseback safari, trout fishing, mountain biking and birding are some of the activities available in Nyika. This plateau which is often compared to the Scottish Highlands and also boasts of the highest number of wild orchids.. Overnight at Chelinda Chalets, full board

Start the day  with a walking safari , game drives in the afternoon and overnight in Chalets, full board.

After breakfast we depart for Vwaza GAem Reserve  which is renowned for is large herds of elephant.  Overnight   at Kazuni Camp full board.

Morning and afternoon Game drive and overnight at Kazuni Camp, full board.

Vwaza Marsh Game Reserve populated with elephants, zebra, hartebeest, impala and puku. The low-lying area of Vwaza Marsh Game Reserve is an interesting contrast to the high Nyika Plateau. Most of the reserve is flat and covered with Mopane and Miombo woodland, but the eastern side is hilly and the reserve is rich in wetlands with the Vwaza Marsh itself in the North and Lake Kazuni in the South. These wetlands provide a haven for animals and birdlife.

Luwawa Forest is in the Viphya Mountains of Malawi at about 1200 meters above sea level. The forest has claim to be the largest man made forest in Africa and is made up of conifers and native trees of Malawi. Overnight at Luwawa Forest Lodge, Bed and breakfast

Depart after  breakfast for Lilongwe. Overnight or transfer to airport for flight home.

OPTIONAL NIGHT PRIOR AND END OF THE SAFARI

US$ 45 per person per night

Prices exclusive of: accommodation in Dar es Salaam and Lilongwe prior and end of safari, visa, personal and travel insurance, tips, and drinks, any other activities not mentioned above.